In part 1 of this blog series, we examined what third-party cookies are, why they are changing, and how an understanding of large-scale changes is essential for maintaining a competitive edge.

How Will the Overall MarTech and Advertising Landscape Be Affected?

In this section, we will explore projections from cookie deprecation across the general advertising landscape and a deeper dive into channel-specific effects. As the deprecation of third-party cookies approaches, every business must determine the degree to which their data will be affected. Not all advertising channels will be affected by the same degree—or at all—so estimating an impact on each individual marketing channel determines the severity of course corrections.

As seen below in a graphic from the Leeds Digital Festival in April, the effects of cookie deprecation form a full spectrum. They range from complete disruption in third-party cookie retargeting on the left to negligible effects in company-owned data on the right. 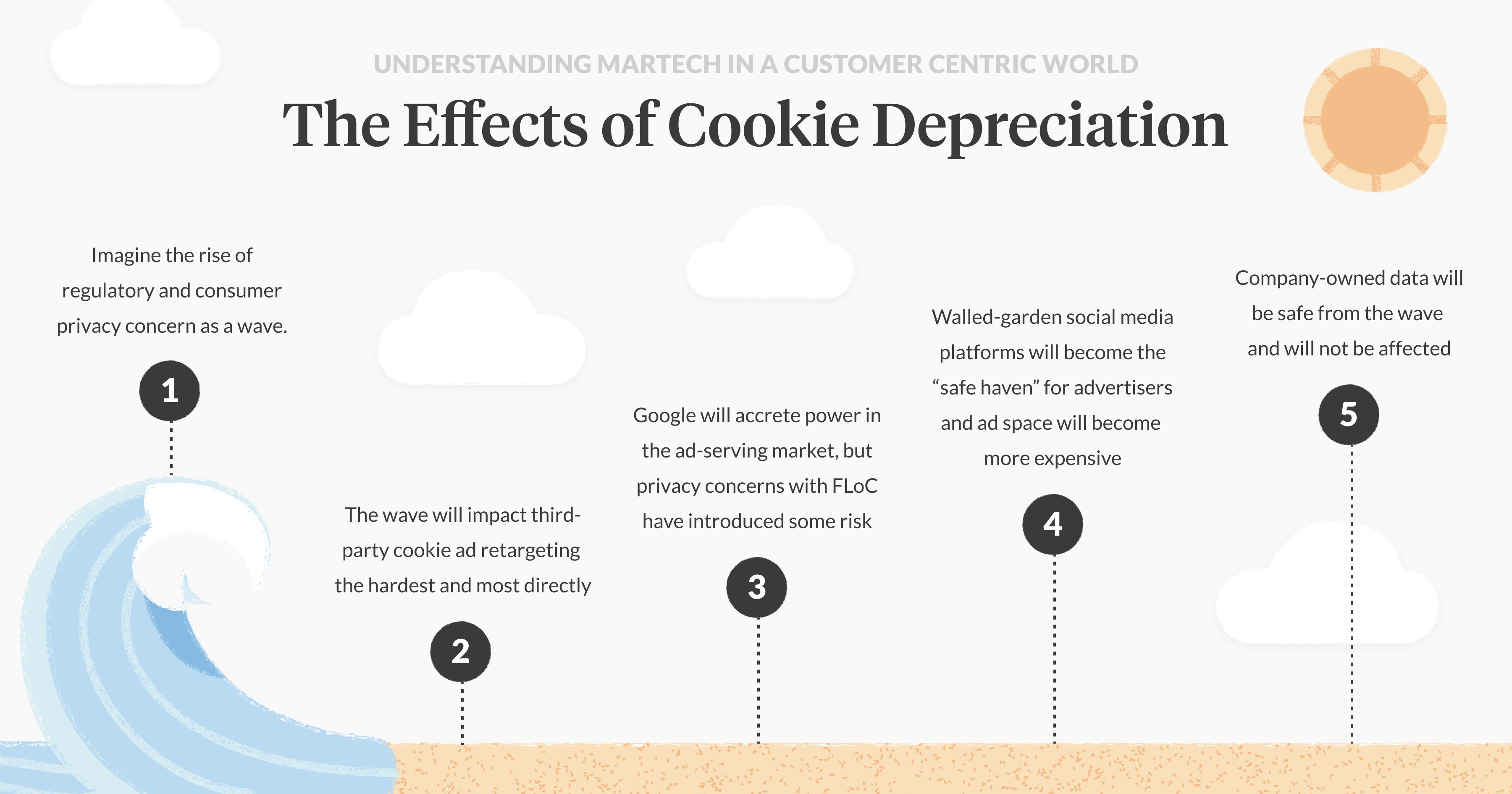 More specifically, a channel-by-channel comparison of different deprecation effects is shown below.

The most affected categories are third-party cookie retargeting and mobile data collection. Mobile data collection changes are due to a different but equally interesting software release by Apple. There are more changes in other categories that will occur from the rebalancing of large marketing budgets such as the ones listed in social media advertising space.

Knowing how any particular MarTech stack will fare during this period of change will depend on not only the channels used but also the proportion of data gathered from those channels, redundancies built into the data pipelines, and the severity of cookie deprecation effects on each individual channel.

What Are Some Common Pitfalls in Response to Third-Party Cookie Deprecation?

As discussed earlier in this series, third-party cookies underly a significant portion of the online AdTech stack and news of their deprecation has prompted a cross-industry search for alternatives. Many of the proposed alternatives either do not fix the core issues with third-party cookies, lose much of the personalization that cookies created, or have significant hurdles to widespread adoption. Four common alternatives are fingerprinting, contextual advertising, native advertising, and email-based authentication (Universal ID 2.0).

One common response to the news of third-party cookie deprecation was to find backdoors and other methods to continue to extract data from users without their consent—the most widespread and pernicious of these methods, fingerprinting, uses information about the browser, screen resolution, OS, and other device information to follow a user from site to site.  Apple already has mounted an attack on this method of information gathering, and other browsers are following in their footsteps. This manner of tracking users is indirect, tenuously connected to actual user needs at best, and very likely to be blocked by either legislation or future software development.

Another way a company can advertise once the deprecation of third-party cookies is in full effect is to take a page from advertisers before widespread behavioral advertising: Place ads where their intended audience will see them. This method, called contextual advertising, has been in use since the first print ads made their way onto paper. While it is somewhat effective at advertising to a group that is exposed to related media, it fails to reach a wider audience beyond that self-selected group, provide multi-channel touchpoints that customers have come to expect, and provide deeper data insights to the live effectiveness of a campaign.

Native advertising is a type of content where the tone, content, and appearance of a paid advertisement matches that of the provider through which it is displayed. These qualities, while regularly (and significantly) improving clickthrough rates and engagement, can make native advertisements much more difficult to recognize than traditional advertisements. When consumers recognize paid content that is not clearly disclosed as sponsored, the trust between a brand and a customer can be permanently marred.

Not only does native advertising harm the bond between customers and companies, but regulatory groups such as the Federal Trade Commission (FTC) and American Society of Magazine Editors (ASME) legally prohibit deceptive native ad practices and require that “the difference between [editorials and paid content] should be clear to the average reader,” respectively. Although native advertising appears to be an effective post-cookie alternative on the surface, this practice is limited by similar consumer and regulatory concerns as cookies themselves.

The three methods above are certainly paths that many groups will take to cope with the advertising change, but they miss the greater opportunity for respectful and effective use of customer data to generate connection and trust.

One alternative for cookies that does not fit into the same buckets as the aforementioned methods is the TradeDesk’s Unified ID 2.0 (UID 2.0) initiative. This initiative intends to use user-provided email identifiers to both push toward first-party user data capture and to allow for advertising to track individual users across the websites that support UID 2.0.

Despite the initiative’s push for informed data gathering and cross-site engagement, UID 2.0 faces significant headwinds in its proposed centralized data architecture, achieving high levels of user authentication for small or midsize websites that do not already require users to sign in, public doubt cast by Google, and the rise of machine-generated throwaway email addresses.

The key to unlocking better customer engagement is not to pry personal data from the unwilling hands of users or to force users to log into every disparate website they visit in the hope of maintaining the status quo. The best move forward is to show them how building a relationship is symbiotic to both buyer and seller and to reduce the friction between deciding to build a relationship and providing relevant data.

To create a custom business roadmap and symbiotic customer relationships, reach out to findoutmore@credera.com. In the last section of our series, Strengthening Post-Cookie Customer Ties, we examine the different methods of strengthening customer ties while respecting privacy and drawing useful insights from data.

How Do You Stack Up? 5 Signs You Need a MarTech Check-Up

Today’s consumers demand relevant, timely experiences across all interactions with a brand. As such, marketers must be prepared to engage customers wi...

5 Key Takeaways From ‘What the FLoC? How Do You Prepare for a Post-Cookie Future?'

The Leeds Digital Festival saw Credera MarTech leaders from across the globe discuss how savvy leaders can create a great customer experience in the w...

The End of Third-Party Cookies Part 1: A Road Map for a Cookie-less Digital World

The end of third-party cookies presents an opportunity to make a well-orchestrated move away from an old standard and push your online marketing into ...